WINNIPEG, Manitoba, August 7, 2019/CNW/ – Pollard Banknote Limited(TSX: PBL) (“Pollard Banknote”) is pleased to announce the addition of The Twilight Zone, one of the most celebrated and influential television series in history, to its storied portfolio of licensed brands. Available now via an agreement with CBS Consumer Products, The Twilight Zone is a natural fit for lotteries wishing to offer their players the opportunity to engage with the timeless, imaginative brand in an entirely new way.

The Twilight Zone originally aired from 1959 to 1964 on CBS, with 156 episodes over five seasons. The show’s durable themes of time, technology, and human nature, as well as its trademark thought-provoking storytelling style, has captivated generations of viewers and inspired legions of fans since its debut. The series has been named as one of the greatest TV shows of all time by both Rolling Stone and TV Guide.

In the 60 years following its introduction, The Twilight Zone has transcended its genre, becoming a familiar pop culture reference and spawning multiple television revivals, as well as films and books. In 2019 viewers entered another dimension with Jordan Peele and Simon Kinberg’s modern re-imagining of the series for CBS All Access, featuring a star-studded cast. As proof of the brand’s enduring popularity, a second season is already on order. 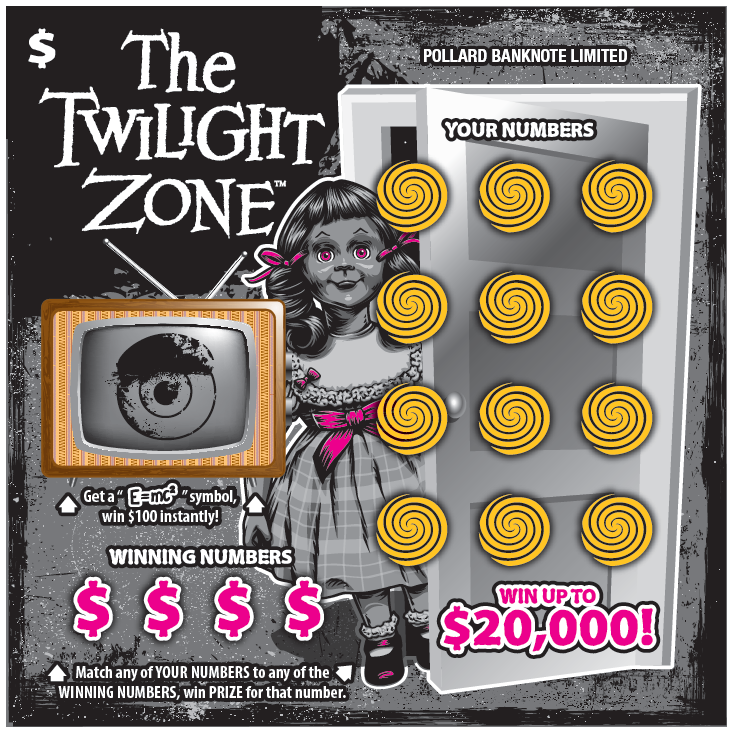 Pollard Banknote will incorporate the brand’s signature style and graphics into mind-bending instant ticket designs and promotional merchandise. The whimsical nature of The Twilight Zone lends itself to complementary playstyles that engage and entertain players, while social media contests and prize options offer limitless possibilities for fun and excitement. Experiential prizes may incorporate attractions such as The Twilight Zone Tower of Terror™ thrill ride, located in the infamous Hollywood Tower Hotel at Disney’s Hollywood Studios, and The Twilight Zone by Monster Mini Golf entertainment venue at Bally’s Las Vegas.

A proven classic with an established and expanding fan base, The Twilight Zone is an ideal addition to Pollard Banknote’s portfolio of nostalgic, player-favorite licensed brands. “We are thrilled to help lotteries invite their players into a new dimension of game play,” said Brad Thompson, Vice President, Sales & Marketing, Pollard Banknote. “The Twilight Zone is a proven classic that lends itself particularly well to a Halloween-themed program, as well as exciting second chance and experiential prizing, which we look forward to exploring with our lottery clients.”

Pollard Banknote’s Licensed Products team offers a comprehensive turnkey program that includes the design, programming, and printing of themed tickets, as well as various options such as second chance draws, a POS program, and broadcast and digital marketing.

Pollard Banknote is a leading lottery partner to more than 60 lotteries worldwide, providing high quality instant ticket products, licensed games, Schafer Systems and Fastrak retail merchandising solutions, and a full suite of digital offerings, ranging from world-class mkodo game apps to comprehensive player engagement and iLottery solutions, including strategic marketing and management services. The company is a proven innovator and has decades of experience helping lotteries to maximize player engagement, sales, and proceeds for good causes. Pollard Banknote also provides pull-tab tickets, bingo paper, and its Diamond Game and Oasis-branded electronic ticket machines to charitable and other gaming markets in North America. Established in 1907, Pollard Banknote is owned approximately 67.5% by the Pollard family and 32.5% by public shareholders, and is publicly traded on the TSX (PBL). For more information, please visit our website at www.pollardbanknote.com.

Certain statements in this press release may constitute “forward-looking” statements and information, which involve known and unknown risks, uncertainties, and other factors that may cause actual results, performance, or achievements to be materially different from any future results, performance, or achievements expressed or implied by such forward-looking statements. When used in this document, such statements include such words as “may,” “will,” “expect,” “believe,” “plan,” and other similar terminology. These statements reflect management’s current expectations regarding future events and operating performance and speak only as of the date of this document. There should not be an expectation that such information will in all circumstances be updated, supplemented, or revised whether as a result of new information, changing circumstances, future events, or otherwise. -30-